The Trimborn Family in Cologne 1872

The descendants of the Trimborn Family are divided into 14 branches - according to the 14 children of Cornelius Balduin und Antoinette Trimborn.

Every descendant has a unique family number which is composed by branch and generation numbers. Married spouses share the same family number added by an E. (e.g. 9-8-2-1-1E)

One of the sons of Cornelius Balduin, Max Trimborn (1), published in 1910 a family tree in the form of an oak tree. This tree goes back to Johann Trimborn, born around 1650, local mayor in Wisskirchen near Euskirchen, and who died in 1737. Among the descendants is also Cornelius Balduin Trimborn in the fourth generation. His name appears on a shield hanging from the trunk in the 5th row from the bottom. The youngest descendant Elisabeth Hopmann (9-4-1) born in 1909 is indicated on the top branch to the left of the trunk.

The lower left and right edges of the family tree are decorated with an excerpt from Homer's Illiad from the 8th century B.C. in the ancient Greek original and in German translation. The ancient Greek version reads according to Johann Heinrich Voß, 1793): "Like leaves in the forest, so are the generations of men; Some the wind scatters on the earth, others again the budding forest drives, produced in the warmth of spring: So the generations of men, this grows, and that disappears." 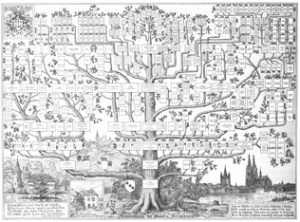 The family tree was created and painted by Father Walther Tecklenborg OFM (* 01.02.1876 + 15.12.1965). He was a painter, restorer, generalogist, local historian and author of numerous writings and researched and created many family trees, including that of the Trimborn family.

In 1926 the family published an updated family tree that was based on the 1910 version. This family tree was published together with the a new version of the genealogy.

This family tree shows circles for the different generations and was created on the occasion of the founding of the Trimborn Family Association in 1972 - Concept and illustration by Karl and Aenne Diepgen (9-5-6+E).

On each generation circle, smaller circles are filled with names and family numbers of the descendants. Nowadays this tree is outdated because of two additional generations.

The coat of arms of the family

Coat of arms of Johann Gerhard Trimborn
(1695-1762). He was reeve of the duchy Jülich-Berg and was living in Bürvenich. His former ancestors  served as reeves, priests, mayors or jury men and came from Dreiborn near Schleiden in the Eifel region.

This Trimborn coat of arms that was published by Max Trimborn (4) on the 1910 family tree. 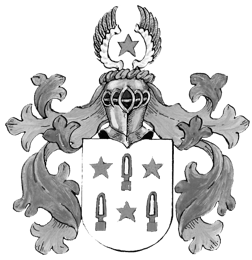 The new Trimborn coat of arms was drawn by Aenne Diepgen (9-5-6E) according to the principles of heraldry.